"Your essay must be written on the lines provided on your answer sheet ... Remember that people who are not familiar with your handwriting will read what you write. Try to write so that what you are writing is legible to those readers."

As they develop their composition skills, their handwriting needs to keep up with the pace of their thought. Students and adults use cursive to increase the speed and ease of writing by reducing the number of times the pen or pencil lifts from the paper.

"Students’ sentence-writing skills, the amount they write, and the quality of their writing all improve along with their handwriting ... In grades 4 to 6, handwriting fluency accounts for 42 percent of the variability in the quality of children’s [compositional] writing, and students’ handwriting speed continues to increase at least until grade 9."
“Want to Improve Children’s Writing? Don’t Neglect Their Handwriting,” American Educator, Winter 2009

But not all cursive handwriting is the same. Conventional looped cursive has not held up to modern life and is being abandoned by most adults, because

Typing is not a sole alternative to cursive, however. Recent studies show that, when it comes to one's learning, keyboarding does not take the place of handwriting.

"Students who took notes on laptops performed worse on conceptual questions than students who took notes longhand.”
Abstract from “The Pen Is Mightier Than the Keyboard / Advantages of Longhand Over Laptop Note Taking." Pam A. Mueller, Daniel M. Oppenheimer, Journal of Association of Psychological Science

Getty Dubay Italic is cursive, too.

Here's what Getty-Dubay basic italic looks like compared with its cursive form. The lines highlighted in green are the joins. See how the letters retain their shape?

For many reasons, italic is a better cursive:

Italic is logical. The chart below shows how other common systems require young students to relearn letterforms — at least 31 of them — and add letter slope to make the transition from basic to cursive. With Getty-Dubay Italic, 3rd graders learn a new capital Y, that's all.

With Getty-Dubay Italic, adults and students can also easily make the transition from printing (for forms or whiteboards) to cursive (for notes or correspondence). Here are some examples of other methods whose letterforms change between basic and cursive, compared with Getty-Dubay Italic. Italic is legible.  With Getty-Dubay Italic, the fundamental information of the letter stays intact. There are no loops to collide with letters on other lines of text. No loops to decipher when others read your writing.  No loops to make your writing look fussy. Italic is adaptable. We adapt cursive writing to our needs and personality by altering size, speed, slope, shape, and spacing.  With Italic cursive, these adaptations don't affect legibility as much as with looped cursive, where loops and serifs tend to get exaggerated.

A letter height that's comfortable for you

A speed to fit the situation

A slope that looks right to you

Spacing that feels right to you

Join the hundreds of thousands of children and adults who have made the logical & legible choice of Getty-Dubay cursive. 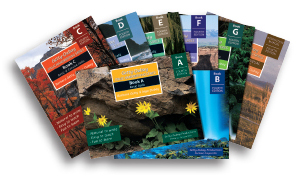